It was time for my first triathlon of 2017. I hadn’t been in open water since September but had put many decent sessions over the winter. So this was a good chance to see how my race fitness faired after the winter. We got to the venue at 5:30am, I nervously set myself up in transition, chatting to a few friends. The chat was about the lake as we had a heavy night of rain so this would make the lake colder and stir it up a bit.

After 223 athletes arrived lakeside we had our race brief, news of temporary traffic lights on the bike route didn’t go down well. As everyone filtered in to the lake I heard a few gasps as people hit the water and I thought ” shit I’m not going to get on well with this “. Once in we had a short time to get lined up and used to the water before we started. Once we started I struggled to get my breathing under control but I kept on moving and before I knew it I was 3/4 around the first lap. My goggles had fogged up a little making sighting tricky apart from the big yellow bouys. Also I forgot to start my watch !! I realised this after about 100m. Into the second lap my goggles became clear and I found a good rhythm and kept it up. My aim for the swim was to get it done, putting no pressure on myself for the swim. Just before the approach to the final bouy I swallowed a bit of water and had to stop and cough it up this then brought on a mini panic, for some reason I just ignored it and pushed to the final bouy. I swam onto the pontoon looking like a beached whale !. I had no idea of my time till i got to my shoes 50 mins ( 5 mins slower but I didn’t worry) I got the wetsuit down to my waist and headed back to T1. I was accompanied by Caroline who is my sports therapist, this was a good boost as I made my way up the hill to T1. It was tough to breath but I felt good and pleased the swim was done. 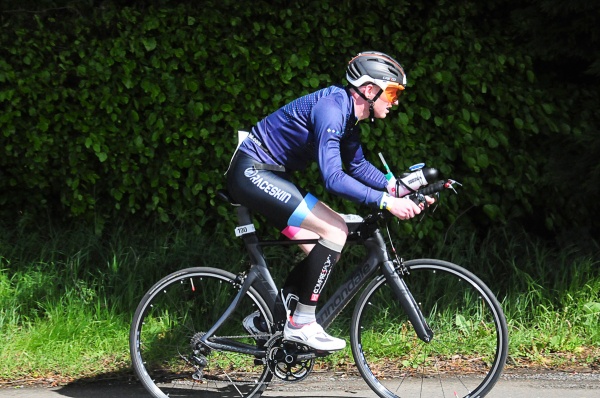 T1 was a bit quicker than last year and I was out on the bike. The first few miles went by very easy but I made sure not to go fast as I normally do. The roads were greasy from the rain over night so I used extra caution on the the corners and descents.I kept to my nutrition which is 2 bits of chocolate power bar wafer every 20 mins, this worked well at Weymouth so  I went with this again. Once I headed towards Bruton I hit the headwind which I found energy sapping. I hadn’t taking this in account with my nutrition. Lap 1 was soon over and lap 2 was going well and feeling easier. I had been pushing on the bike like I had been doing in training over the last few months. At the end of lap 2 I hit T2 about 1-2 mins quicker than last year, I was happy with that. I racked the bike took my helmet off and set myself up for the run. I normally look forward to the run but I was tired after working hard on the bike.

I started the run feeling tired which I was prepared for. Once I was on the road after a footpath sections my calfs went tight and cramped up. I tried to run small paces till I found a gate so I could stretch them out. This helped but I had to run walk for 2 miles to get rid of it. This was frustrating for me. I thought at this point just get the medal its been a tough day. Once on the down hill I began to feel really good so I held my pace by feel. I had my garmin set on overall race time so I had no idea of my actual pace during the run. I think in hindsight this wasn’t a good idea. On lap 2 I caught up to some other athletes who were on lap 2 and after some banter we all found it a tough day just as the rain came down. That was the first time in 6 years of running I had been caught in the rain. My run walk continued to the end of lap 3. I was met by my sister at the top of the hill and she ran behind me with my dry robe ready for me once I crossed the line. The remainder of the crowd shouted encouragement as I kicked in to a sprint to get across the line. I flopped to the floor feeling completely knackerd. I couldn’t breath for a while, overcome with emotion I just lied down for a minute. Got my medal and a foil blanket around me.

We use cookies on our website to give you the most relevant experience by remembering your preferences and repeat visits. By clicking “Accept All”, you consent to the use of ALL the cookies. However, you may visit "Cookie Settings" to provide a controlled consent.
Cookie SettingsAccept All
Manage consent

This website uses cookies to improve your experience while you navigate through the website. Out of these, the cookies that are categorized as necessary are stored on your browser as they are essential for the working of basic functionalities of the website. We also use third-party cookies that help us analyze and understand how you use this website. These cookies will be stored in your browser only with your consent. You also have the option to opt-out of these cookies. But opting out of some of these cookies may affect your browsing experience.
Necessary Always Enabled
Necessary cookies are absolutely essential for the website to function properly. These cookies ensure basic functionalities and security features of the website, anonymously.
Functional
Functional cookies help to perform certain functionalities like sharing the content of the website on social media platforms, collect feedbacks, and other third-party features.
Performance
Performance cookies are used to understand and analyze the key performance indexes of the website which helps in delivering a better user experience for the visitors.
Analytics
Analytical cookies are used to understand how visitors interact with the website. These cookies help provide information on metrics the number of visitors, bounce rate, traffic source, etc.
Advertisement
Advertisement cookies are used to provide visitors with relevant ads and marketing campaigns. These cookies track visitors across websites and collect information to provide customized ads.
Others
Other uncategorized cookies are those that are being analyzed and have not been classified into a category as yet.
SAVE & ACCEPT